Having trapped emotional baggage within your body can greatly affect your overall physical and emotional well-being. However, thanks to Dr. Bradley Nelson’s work and publications in the field of energy healing and muscle testing, it’s possible to easily identify and release trapped emotions! Discover how to use the Emotion Code® Chart to release the trapped emotions that could be holding you back from optimum wellness.

What is the Emotion Code Chart?

The Emotion Code Chart is an easy-to-use tool that allows Emotion Code practitioners to identify which emotions have become trapped within the body. The chart includes commonly found emotions, which are listed in columns and rows. Each of the listed emotions represents the remnant of vibrating energy that may have become lodged anywhere in your body and could be exerting a distorting force on the energy field of your being.

These negative emotions are generated by the organs and glands in response to stress, experiences, negative thoughts, or imbalances in the body. An emotion can become trapped if it is overwhelming in some way, or if the normal emotional processing of the feeling gets interrupted somehow.

How do I use the Emotion Code Chart?

Releasing trapped emotions is a quick and easy process that was designed by Dr. Bradley Nelson in order to make energy healing accessible for anyone! The Emotion Code Chart is designed to make it much easier for you to communicate with your subconscious mind in order to determine if an emotion is trapped, which emotion it is, and then release the identified emotion.

Each stuck energy needs to be identified through the Emotion Code Chart and then released individually. It’s not possible to release them as a bundle, even though sometimes they will be connected or intertwined. Your body knows exactly how many trapped emotions it can release in a session, and in what order it wants to release them.

At first glance, The Emotion Code Chart may look complex, but by spending just a few minutes understanding how it works, you’ll find it’s a key component in potentially finding and releasing trapped emotions. After verifying with yourself or your test subject that you are ready to either test or be muscle tested, it’s time to start asking questions in order to focus on any potential trapped emotions.

The Emotion Code Chart consists of 60 emotions, divided into two columns and six rows. Each row lists the areas of the body these trapped emotions are frequently found, although there are exceptions to this. Each box then contains five emotions. To begin zeroing in on a specific emotion, ask yourself or your subject, “Is this trapped emotion in Column A?” Perform the muscle test and, if the muscle being tested weakens, we believe this is a “no” answer. In that case, ask if the trapped emotion is in Column B. In the event you receive a double positive or double negative, we recommend taking a breath, resetting, and repeating the questions until you get a definitive answer. Notice that once you have determined which column the trapped emotion is in, you will have cut the list in half! 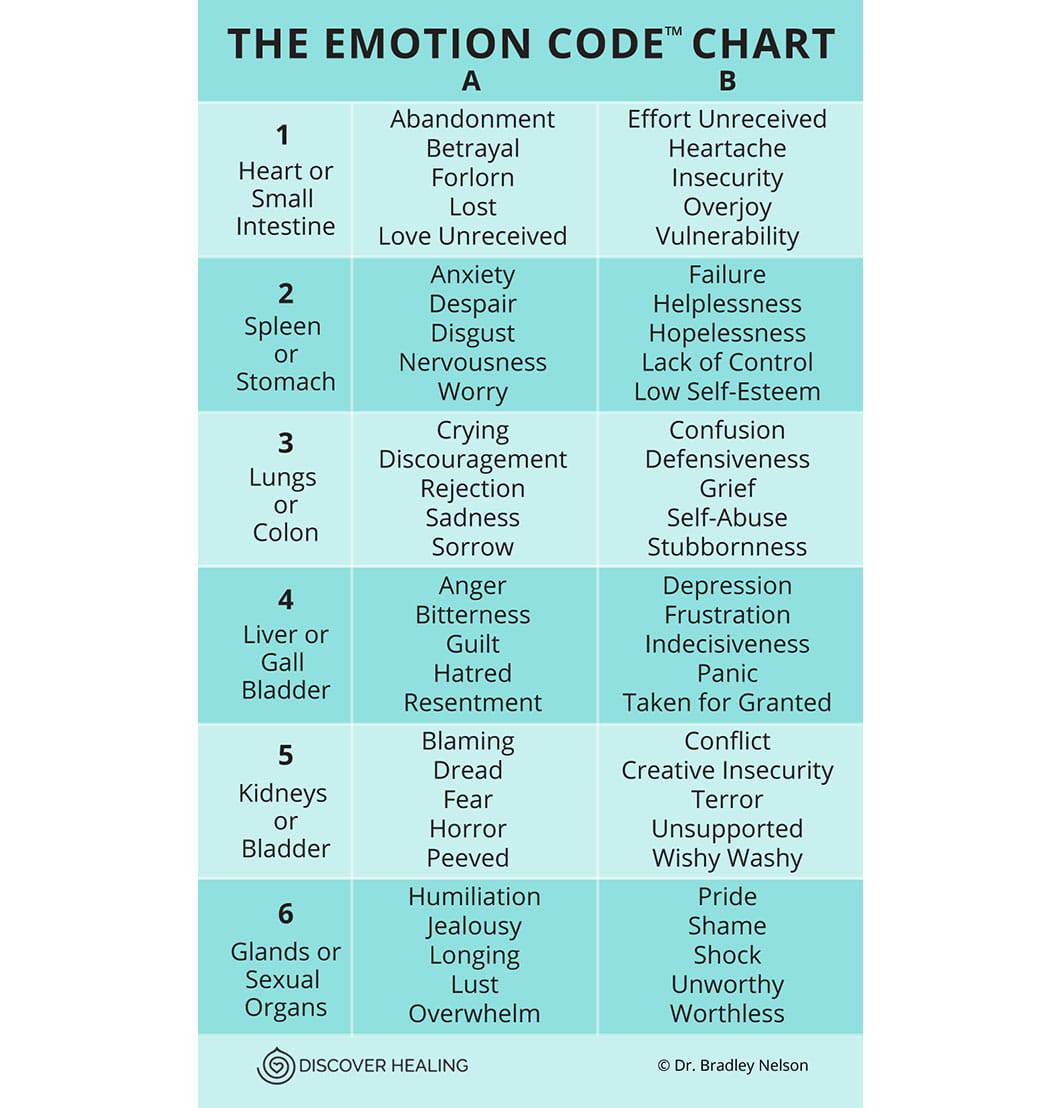 “Is this trapped emotion in Column A?”

Once you know which column the trapped emotion is in, determining the specific row can help you further pinpoint this particular piece of emotional baggage. Notice that each column consists of six rows. The fastest way to find the trapped emotion is to ask, “Is this trapped emotion in one of the odd rows?” If the answer to this question is “yes,” you have narrowed the list down to the emotions in the odd rows in this column. If the answer is “no,” you will have narrowed the list to the emotions in the even rows in this column. I think you get the idea!

For example, if your body responds positively to Column A, Row 3, you will have narrowed your search to just five emotions: crying, discouragement, rejection, sadness, or sorrow. At this point, the proper procedure would be to test the emotions one by one, asking, “Is the trapped emotion Crying?” followed by a muscle test. Keep in mind that you’re only looking for one emotion on the list at any given time. One of these emotions will test stronger than the others, indicating the trapped emotion that you’re looking for.

“Is the trapped emotion Crying?”

If all of the emotions test weak or “no,” we believe you have uncovered an “inherited” trapped emotion – or an emotion that was passed to you from your biological mother or father. If that’s the case, you can then use a slightly deeper process to determine where and when the trapped emotion originated.

Get Certified In The Emotion Code

Or, start your online certification in the Emotion Code today! You could become a verified expert in the energy healing field, and start using muscle testing with the Emotion Code Chart to identify and release trapped emotions – improving your own life and the lives of your loved ones!

This article was originally published in January 2018, it has been updated for accuracy.